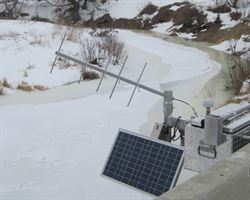 Heavy snowpack in the downstream reaches of the Cannon Ball River expose the area to an above normal flood risk when the snow melts. The additional stream­gages do not eliminate flood risks, but provide additional time to react based on information provided by the stream­gages to local officials and to members of the public who may be affected by potential flooding.

The real­time water­level data from these gages, after installation, will be made available on the U. S. Geological Survey flood website at the URL: https://nd.water.usgs.gov/floodinfo/.

A current forecast of water levels near Bismarck, North Dakota, provided by the National Weather Service can be found at the following website: http://www.weather.gov/bis/.

Additionally, each Tuesday, the Missouri River Water Management Division will provide weekly updates on plains and mountain snowpack and mainstem reservoir conditions. “We are committed to providing everyone the most up­to­date information regarding snowpack and reservoir conditions,” said Jody Farhat, Chief of the Corps’ Missouri River Basin Water Management Division.

The updates are posted on the main page of the MRBWMD website: http://www.nwd­ mr.usace.army.mil/rcc/, under “Weekly Update – Winter/Spring 2017”.